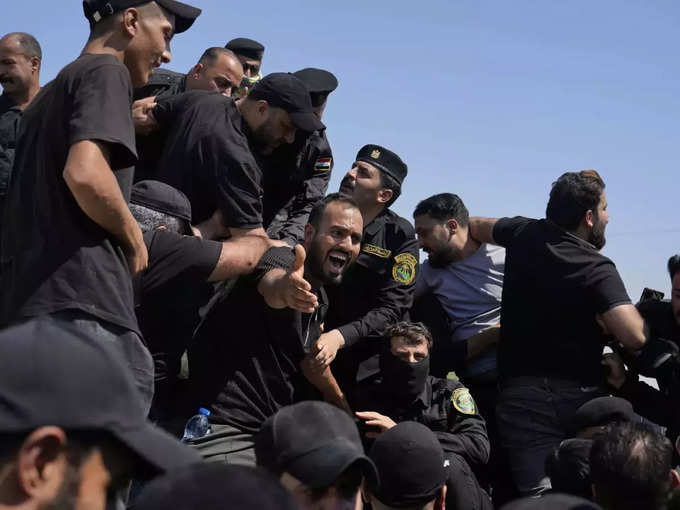 Baghdad: Iraq has a long history of political instability. But Iraq turned into a civil war-like situation on Monday after Shia cleric Muqtada al-Sadr announced he was stepping down from politics. Supporters of al-Sadr took to the streets and stormed the green zone of the capital. During the night, about seven shells spilled in the green zone. About 15 supporters of al-Sadr were killed. Even earlier, in July, his supporters entered parliament. In such a situation, the question arises who is Muqtada al-Sadr, with whose gesture Iraq was burned.

Muqtada al-Sadr is a Shia cleric. He is one of the most influential leaders in Iraq. In the elections held in October 2021, his party emerged as the biggest winner. However, they did not win the necessary majority to form a government. Sadr’s father Mohammad Sadiq and father-in-law Mohammad Baqir were also influential religious leaders in Iraq. Both were killed by Saddam Hussein. Speaking of Sadar, although he is a Shiite, he is against Iranian interference in Iraqi affairs.

America’s Adversary – Al-Sadr
Al-Sadr is influenced by his father’s ideology. When Saddam Hussein died in 2003, he was in the spotlight. He started the Al-Sadrist movement by uniting thousands of people. This movement also has a military wing, which was given the name “Jaish al-Mehdi” or “Army of Mehdi”, which was later changed to “Saray al-Salam” or “Peace Brigade”. Al-Sadr may not support Iran, but that doesn’t mean he likes America. In a 2003 television interview, he said, “Saddam was a little snake, but America is a big snake.”

Al-Sadr against liberalism
He is against liberal ideology in Iraqi society. He condemned the mixing of homosexuals, men and women. In 2018, Sadr formed a new coalition and won 54 seats in Iraq’s first parliamentary elections. These elections were held after the defeat of the Islamic State. He rejected US interference in the formation of a new Iraqi government and called it an aggressor. In a country torn apart by internal strife, Sadar has changed again. This time he has established himself as an Iraqi nationalist. He has been critical of Iranian influence in Iraq.

Barely survived a drone attack
In December 2019, Sadar’s home in Baghdad was attacked by a drone. However, at this time, Al Sadr was lucky, as he was not in the house. The house was damaged in the attack, but no one was hurt. After a US drone strike on Qasem Soleimani in 2020, al-Sadr called for the immediate cancellation of the security agreement with the US, the closure of the US embassy and the withdrawal of US troops from Iraq.

Tear gas was used against the protesters.

His followers believe everything
Al-Sadr’s followers believe everything he says. An example of this was in July this year, when his supporters entered the parliament. Al-Sadr issued a statement asking for a safe return home, after which the protesters left the parliament building. al-Sadr’s ability to mobilize crowds and ground supporters makes al-Sadr an advantage over his political rivals.