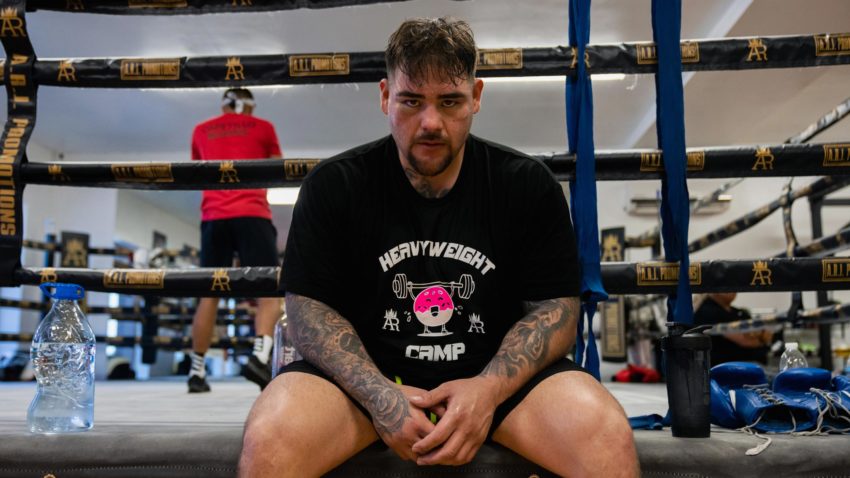 The former unified heavyweight champion made a major change to his approach to the ring ahead of the showdown against the powerful Luis Ortiz on Sunday, September 4th on the FOX Sports PBC pay-per-view.

His boxing nickname is simple and to the point: “Destroyer”.

And perhaps the moniker has never been more apt than on December 7, 2019, when then-unified world heavyweight champion Andy Ruiz Jr. unveiled his four newly minted title belts in a rematch with Anthony Joshua in Saudi Arabia.

Just six months after shocking the boxing world by inflicting England’s Joshua his first loss on short notice and becoming the first Mexican-born world heavyweight champion, making him an instant hot property, Ruiz suffered an epic flop in his first defense. He again stunned the boxing world, but not for the better, showing himself in bad shape and gaining 15-20 pounds overweight, returning the titles to Joshua by unanimous decision, and also experiencing unspeakable embarrassment during his second career loss.

Many of the affable, chubby Ruiz’s numerous Mexican and Mexican-American fans felt that the Destroyer, who got his name from destroying things as a child, had taken a giant step towards ruining his burgeoning boxing career. The Imperial, California native even considered retirement after letting down his family, friends, fans, and mostly himself. Ruiz became depressed, stopped exercising and started eating. He told Men’s Health magazine that he only ran to the grocery store or fast food at the time.

Fortunately, Ruiz overcame depression and changed his mind about giving up the sport he had been doing since the age of six. Nineteen months after the crushing defeat, the Destroyer fought again. Despite being knocked down by Chris Arreola, 40, at the start of their fight in May 2021, Ruiz won via unanimous decision to get his career back on track.

Ruiz, 32, is back with a new coach, his third in three fights. Mexican Alfredo Osuna took over these duties from Coach of the Year Eddie Reynoso, who made his name coaching Canelo Alvarez. Ruiz was previously trained by Manny Robles during his second fight with Joshua. The fighter has his own reasons for the latest change.

“(Osuna) has a lot of experience with lefties and when we do mitts he switches to orthodox too… and that’s exactly what Ortiz does, so we wanted to take advantage of the opportunity,” Ruiz said in a recent interview. “We have a lot of time with Osuna and he is 100% committed to me. That’s what we want because it’s going to be an uphill battle.”

By the time he steps into the ring with Ortiz, Ruiz will have been training hard for about four months.

“It’s hard to come back after a long break, but that’s why we had a long training camp,” says Ruiz. “And after my last fight with Arreola, I had knee surgery. There are a lot of things I should have done before this fight, but I took it too lightly and did the best I could.

“I got dropped, I got up and I had to find a way to win this fight. What helps me is that I’ve been boxing since I was six, so the muscle memory always stays with you. As long as you stay busy and dedicated for so many months, and with the sparring we’ve had, we shouldn’t have a problem.”

A long training camp is especially useful for a heavyweight known for his fast hands and explosive power of punching combinations. “We fight in a different style, so we need to be careful on our feet and drag our feet because Ortiz is left-handed,” Ruiz explains. “So we have to use different combinations, we have to keep moving left and right, a lot of the little things that (Osuna) gives me hints work in sparring and in the gym.”

Ruiz and Reynoso parted ways on good terms and there is a chance they could work together in the future. “In the future, I’m pretty sure that for other fights I’m going to invite him to my gym and help me as a team,” Ruiz said. “I appreciate everything he has done for me and he knows it. That’s why I wanted to set up my own gym (in El Cajon, California, east of San Diego) so I could do more of the sport and not be dependent on other gyms.”

Ruiz approaches the Ortiz fight “feeling strong and not focusing on losing weight.

“I’m just trying to be myself the way I was (in the first fight with Joshua) and have a little bit of weight to have that strength because Ortiz is a big guy. Of course, I don’t want to be too skinny or anything like that; I want to carry my weight well. I feel comfortable at 260 pounds, I feel like this is my weight type; I hit harder and feel more explosive at this weight.”

One fan that undoubtedly sticks with Ruiz through training, ups and downs is his 10-year-old son AJ, the second of Andy and his wife Julie’s five children.

“He’s a big motivator. He is always with me. I want him to see what his dad is trying to do, trying to create a great legacy for him and his future,” Ruiz explained. “And I want to show him what hard work means. I tell him, “Son, you don’t have to fight. Let me fight so you don’t have to fight and get hurt because it’s a business that hurts. I just want you to worry about school, worry about your education and just be smart.” ”

The son also wants to become a boxer, but for now, “he’s focused on just boxing,” Ruiz said. “What I would like him to do is become part of ARJ Promotions and help me create young fighters and try to turn them into champions. This is what we do for the three fighters that I have, helping them so that they can… make their dreams come true by giving them opportunities.”

Ruiz has a special relationship with his loyal Mexican fans, who “without them wouldn’t have created the real Andy Ruiz. They inspire me a lot, because my first goal was to become the first Mexican heavyweight champion, and thank God we made this history,” he says. “We made my dreams come true and I am so pleased that they open their arms and accept me as a real Mexican warrior … It means a lot, because even when I fought for my country, fought for Mexico in the Olympic trials and all that, I represented my country. I’m Mexican at heart and I’m doing this for my people.”

“God forbid it will (fight), but like Mike Tyson said, we all have a plan until we get hit. My plan is to just go in there and do what we’ve been working on throwing combinations and we have to put pressure on him and try to get him out of there and wear him down with a lot of body work.

“I know that he will try to get a knockout, so we are ready for it. I feel that Ortiz is the most dangerous during the first six rounds and the main thing for me is just to be careful and break him and throw combinations. We have to be smart, be careful and choose our punches.”

If he surpasses Ortiz – far from certain – Ruiz is eyeing the wide-open heavyweight division.

“(Deontay) Wilder has already started training, he is coming out of retirement, and this fight can be easily arranged because we both signed Al Haymon,” Ruiz explained. “I would really like to fight Joshua again because we are one against the other. That’s why I chose Ortiz, because in case (Oleksandr) Usyk wins their rematch (which he did on August 20 to win both meetings), at least I have a resume that I fought a southpaw. and I can succeed with a lefty. I know Usyk has a clumsy style too, but I’m going to show people that I can adapt.”

But make no mistake, it is King Kong who is now completely occupying the Destroyer’s psyche. And he knows as much as his future in the sport is at stake.

“It’s a big fight for me to climb the stairs again.”

For a closer look at Andy Ruiz Jr., visit his fighter page.