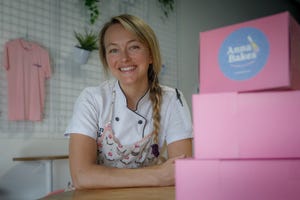 If Anna Ross’s trusty “cupcake apron” was a recipe in her baking-loving kitchen, it would be equal parts functional and a talisman with a dash of whimsy. She’s worn a pink-trimmed apron studded with tiny chocolate cherry cupcakes since her school days.

“I wore this apron almost every day in high school and again when I started my business from home. A lot of treats were baked in this thing!” says Ross, pastry chef and owner of Anna Bakes, an independent bakery in West Palm Beach. “The apron will always remind me of my high school baking days, as well as my early days with Anna Bakes.”

Dedicated chefs like Ross have their own culinary secrets, habits and gadgets. This cupcake apron may be part of Ross’s baking ritual, but the tool that gives her superpowers is her expandable pastry knife, which can cut straight, perfectly parallel lines into complex pastry.

“I’d be lost without my accordion cutter!” says Ross, who turns 26 this month. “That’s 10 times more time efficient for marking bars and cakes than a ruler and a knife for cutting the same slices.”

Heirloom spoon in the ghost kitchen

West Palm Beach chef Emerson Frisbee finds vintage magic in his commercial kitchen whenever he reaches for a quenelles spoon — one that makes delicate ovals of sweet or savory creams or cereal — that he inherited from his grandmother.

“This is a small silver spoon that I use for serving dishes, scooping up quenelles and tasting. I always have it in a water bath (steamer),” says Frisbee. “Every time I try the sauce with my grandmother’s spoon. I remember sitting in her kitchen as a child.”

Frisbee is the head chef at the Palm Beach Meats gourmet shop. He also leads a number of food delivery operations and is the chef of a Friday dinner series called Clandestine. You can imagine that his commercial kitchen is crammed with all sorts of gadgets.

Not much for its delivery-only operations, says Frisbee.

“I manage six ghost kitchens in a week, and those menus are less dependent on gadgets,” he says. “My daily cooking isn’t very technical, and as they say, I don’t necessarily use a lot of gadgets.”

But cooking for his dinner series, which Frisbee presents as a chef’s tasting concept, is a different story. “It takes a lot of tools and small gadgets to create a much higher level exquisite menu,” he says.

Speaking of culinary skills, steakhouse chef Jamie Steinbrecher is blunt about the sharpest tool in his culinary arsenal: “A very sharp chef’s knife.”

“This is definitely the first tool I invested in as a young chef and is a staple in any chef’s kit,” says Steinbrecher, head chef at Jupiter’s new Lewis Steakhouse and previously longtime chef at sister restaurant Okeechobee Steakhouse. “Having a wide variety of tools is definitely an advantage, but a sharp knife is priceless.”

Steinbrecher’s instruments may be inspired by the classics, as are his menus, but he says he’s always up for a culinary adventure.

“Doing something new is fun and exciting,” he says. “My favorite dish that I cook at any time, with any gadget or technique, is everything that I have not cooked before.”

Striking a balance between classic and adventurous, local corporate chef and restaurateur Lizabeth Summa says she’s “in love” with a new kitchen tool, the Tribest grain mill, which she uses to make rustic breads and other baked goods.

“It’s not the most common thing you think about in the kitchen. But it’s absolutely beautiful — everything is made of wood, except for the round stones inside,” says Summa, corporate culinary director of Big Time Restaurant Group.

At work, Summa oversees the kitchens of the group’s six restaurants – Elisabetta’s Ristorante (named after Summa’s childhood nickname), City Cellar, Louie Bossi’s, Rocco’s Tacos, City Oyster and Sushi Bar, Grease, and Big City Tavern. At home in West Palm Beach, her cooking is inspired by her travels as well as fantasies gleaned from her vast collection of cookbooks.

Recently, all these fantasies have been associated with interesting grains.

“I bake whole grain bread. I buy whole wheat or rye grains and grind the flour myself,” Summa says. “I love the freshness of whole grains.”

The tabletop grain mill is “really easy to use,” she says. “It gives character to your baked goods.”

For example, Summa likes to make 100% rye flour in her mill. She adds spices like cardamom or coriander to it before making bread out of it.

“I love to fry it with European butter and sprinkle it with smoked salmon,” she says. “It stays fresh and so moist.”

Preservation of the “old school”

Bread baking is the life of French-trained professional baker Billy Himmelrich, who has owned and operated the Old School Bakery in Delray Beach for over two decades. Upscale restaurants trust him with authentic handmade bread. Local hunger relief efforts, including the Palm Beach County Food Bank, are fueled by his generosity as Himmelrich donates most of his leftover bread.

But his favorite kitchen tool, a French non-stick aluminum pan, has nothing to do with baking bread. However, this is due to the memories that feed his own soul.

“It was my favorite pan when I learned to cook in Burgundy in the late 80s. I can close my eyes and see white mushrooms and river bass on the cooktop,” says Himmelrich, who describes himself as “the opposite of gadgets and 100% old school.”

Trained at the Ritz-Escoffier culinary school in Paris, Himmelrich honed his skills by working at three-star Michelin restaurants in France. Until now, he reaches for his Matfer brand pans. It has two 10″ pans and two 12.5″ pans.

“I change them more than once a year,” says Himmelrich, who packed one of the pots to take with him to Maine for cooking on vacation. “Aluminum is very sensitive to heat, and the pan is great for both the stovetop and the oven. Whether it’s the fish I caught, frittata or wild mushrooms, it never lets you down.”

His favorite dish that he cooks in his favorite pan? “Scrambled eggs with lacy edge, tarragon and one-sided snapper, cooked 85% skin side down.”

His preference for “old school” equipment and methods is reinforced by a framed typewritten letter he keeps close at hand. It was written by the late New York Times food critic Craig Claiborne for a reader in New York.

“I think microwave ovens are completely unnecessary in a serious kitchen,” Claiborne wrote in an October 1983 letter. “I rarely use mine except to defrost something. It takes up valuable space.”

Readers: Do you have a favorite kitchen gadget? Tell us about it! Send an email to [email protected] with details and a photo and we may publish them in future articles.