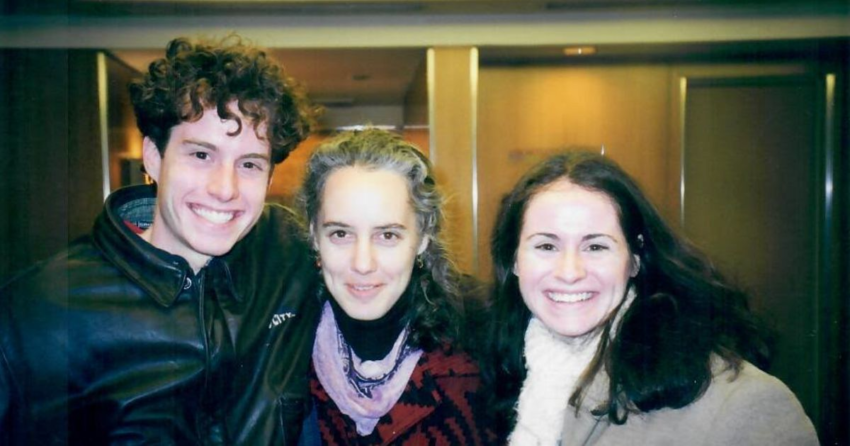 My father was not the one who told me that I have a secret sister.

On a summer afternoon in 2000, when I was 24, I was shopping for pillows for the apartment I had just moved into with my fiancé. My mother called me on my mobile, and I heard a strange, nervous excitement in her voice. I stopped on the sidewalk with my shopping bags to listen.

“I’m not sure how to say it,” she said. “Your father was hiding something from you.

I wondered what she might be talking about. She and my father had been divorced for almost 20 years and barely spoke.

“You have a sister. She was given up for adoption after your father got pregnant with his girlfriend long before he met me,” she said. days Your brother and I thought you might want to get to know her.

Did my brother know? I asked if my father told him, but she said no. “Seven years ago, your brother was rummaging through your father’s briefcase and found letters from your sister,” she told me. “Then your brother began to secretly correspond with her. One day I saw an email on his computer and asked who it was from and he swore to me to keep it secret.”

“So Dad doesn’t know that you two know?” I have asked.

“No, I doubt he even knows that your sister is coming to town,” she said. – Do you want to meet her?

“I’ll call you back later,” I told her before hanging up.

I only noticed that I was crying when people passing me down the street looked at me sympathetically. I sat on the curb, trembling. I was shocked, but another part of me felt relieved. Intuitively, I always felt that my father was hiding something from me. When I heard this news, I confirmed the fear I had been harboring for years.

I was baffled as to why he kept this secret. My parents divorced and married other partners when I was little, and I already had all sorts of siblings: my brother, a half-sister from my mother’s first marriage, and three half-siblings from my father’s second marriage. Why is he silent about it? I didn’t know why my brother never argued with his father or shared news with me. It was betrayal after betrayal.

When my fiancé heard how upset I was, he came to pick me up. As I unpacked the new things I had bought for the house we were building together, the shock of my past washed over me in waves. It dawned on me that I was no longer who I thought I was—my father’s firstborn.

One of my earliest memories of my father is when I sit on his lap and hear him say that his father never told him that he loved him and that he was going to make sure to tell me that he loved me. He took me to fun restaurants and musicals like Annie and Chorus. I took comfort in being his first child, even as he remarried and had more children and our dates—our special father-daughter time—diverged.

Despite an unstable childhood divided between two different households, I thought I knew my place. Now I didn’t know anything at all. I didn’t want to meet my father’s hidden daughter behind his back, or hide it from him as he did from me.

“My parents divorced and married other partners when I was little, and I already had every imaginable sibling—my brother, a half-sister from my mother’s next marriage, and three half-siblings from my father’s second marriage. Why is he silent about it?

I called my brother and told him, “Call your dad right now and tell him everything you know, or I’ll do it myself.”

The next day, my father asked me and my brother to meet him at a grocery store that I had never heard of. I suspect he thought I wouldn’t make a scene in an unfamiliar public setting, but I foiled his plan. Tears streamed down my face as I ignored the inquisitive looks of people trying to enjoy matzah ball soup.

Why didn’t you tell us? I sobbed.

“Because I knew you would react that way,” he replied.

My brother nodded. “That’s why I didn’t tell you before. I was afraid to upset you, and besides, I knew that dad would be angry if he knew that I was rummaging through his things.

Hearing this, I got angry and became defensive. I was often called a sensitive person in my family and made me feel that it was not good to have feelings. So it was my fault that they lied to me?

“It’s all right,” I finally told my brother. “I shouldn’t be upset with you. It’s not your responsibility to tell me, it’s your dad’s responsibility. And maybe if he had told me earlier, I wouldn’t have reacted like that.”

My father told us that when his girlfriend found out she was pregnant, she told him she was moving to another state and was planning to give the baby up for adoption. Two decades later, my sister accessed her adoption papers and contacted both of her biological parents. My father then began to correspond with her and even met her several times over the years.

When were you going to tell us? I have asked.

He shrugged. “Probably never. Although she’s a wonderful person, and oddly enough, she looks just like you, Sarah. If you want to meet her, you don’t need my permission.

I envied this ghostly twin sister, and my feelings puzzled me. I have never felt this way for any of my brothers and sisters.

I was debating whether or not I should meet her when a friend, an only child, changed my mind.

“Do you know how happy I would be if I knew that I have a brother or sister?” she said, “What an incredible gift you have received.”

Her comments got me thinking. Eleven years ago, I lost my younger sister to a rare genetic disease. How could I turn down the opportunity to meet someone who shares the same bond with me?

The next evening, my fiancé and I met my new sister at a restaurant. My father was right – she was sweet, kind and modest. I noticed that we both inherited dark eyes and curly hair from our father. She looked a bit nervous and, like me, was eager to make a good impression. In her warm presence, all my envy disappeared.

Since then, we have been linked by mutual interests in music and meditation, both by phone and in person. I love her very much, but this is so much more. I admire her political activity and ideals. She is a medical professional and I have never heard her blame anyone for the hardships she had to go through. She lives with an easy, open acceptance that challenges me.

Twenty years after meeting my sister, my world shook again when I received a similar phone call from my mother. This time it was her turn to be surprised by the discovery of a new family member. Ancestry.com notified her that she was a close genetic couple with a woman she did not recognize.

My grandparents passed away many years ago, so there was no one to confirm this biological connection. When my mom showed me a photo of a woman on Facebook, I took my breath away. She had red hair and a dreamy, detached expression that I recognized all too well—she was a carbon copy of my mother. The geneticists confirmed our suspicions a few days later on a conference call. They are step sisters.

Unlike my father, who got pregnant by a girlfriend when he was young, my grandfather had an affair during his marriage to my grandmother. My mother and her sister were born only a few months apart, but in different parts of the country. When asked if her father had ever traveled to the East Coast, my mother replied that he was a traveling salesman. “We hear that a lot,” the geneticist told her.

I was stunned at how upset I was by this discovery. I have always adored my grandfather, a World War II veteran who devoted himself to volunteer work. Although I knew that his marriage to my grandmother was troubled, I didn’t know how serious it was. His betrayal clouded my memories of dancing with him at my wedding a few months before his death. I regretted naming my son after him. I was angry with my grandfather for deceiving my mother, just as I was angry with my father for hiding my sister from me. It was frustrating that we could not get answers from him, as my father and I did.

“As soon as I saw how my mother was overjoyed to find her sister so late in her life, I forgave him. I realized that his past, like my father’s, had nothing to do with me. It wasn’t their actions that were reprehensible, it was their decisions to cover up what happened that hurt me.”

However, once I saw how my mother was overjoyed to find her sister so late in her life, I forgave him. I realized that his past, like my father’s, had nothing to do with me. It wasn’t their actions that were reprehensible, it was their decisions to cover up what happened that hurt me.

I learned an important lesson from the pain caused by family secrets. My husband and I are as open as possible with our sons regarding our personal history. I tell them the truth when they ask me questions about my past. I sympathize with my father when I feel uncomfortable revealing previous mistakes. Because of my story, I get over my discomfort and tell them anyway. I’d rather they hear it from me than from anyone else. As a result, we have become closer. Sometimes I worry that I will be judged or that my knowledge will be used to justify my own mistakes, but so far this has not happened. Although I think my father made the mistake of hiding his past, I view my relationship with my sister as a blessing and I know he feels the same way. The world is richer knowing her, and we are both grateful.

Similarly, my mother and her sister have become quite close and talk often. She went to visit her sister and attended her niece’s wedding. Last year, due to COVID, I attended a Zoom baby shower for my cousin and not in person. It was still fun to join in the festivities and watch her open presents. We continue to communicate on social networks, but this is not enough. I hope that this year I will have the opportunity to travel to meet my new family and make new connections. Enough time has been stolen from me, and now I must restore what was lost.

Sarah Leibov is a writer and Feldenkrais practitioner from Chicago, where she lives with her husband and teenage sons. She is working on a memoir about how she survived her teenage years. You can find her on Twitter @LeibovSarah.

Do you have an exciting personal story that you would like to publish on HuffPost? Find out what we are looking for here and send us an offer.