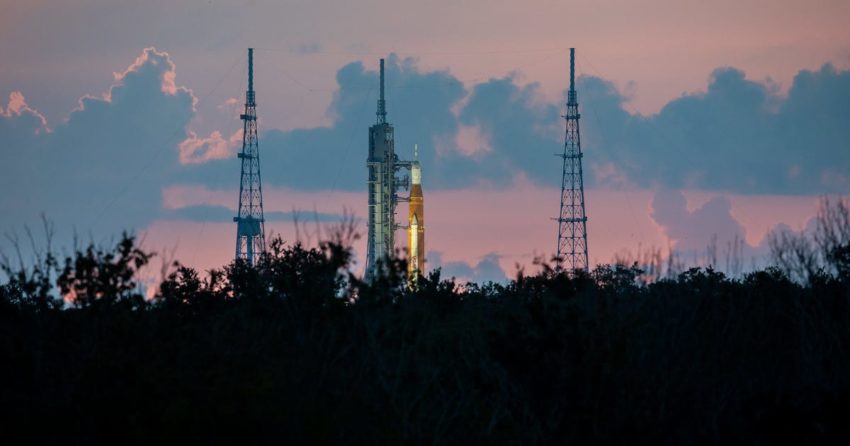 There’s a 32-story rocket mounted atop a launchpad at NASA’s Kennedy Space Center right now. On Monday, it’s scheduled to propel a spacecraft to the moon.

After years of delays and wads of extra money, the Artemis I lunar mission is finally set to lift off before dawn on Aug. 29.

Though the vehicle commissioned for this endeavor — formally named the Space Launch System and keenly called “the most powerful rocket in the world” — won’t usher astronauts to the moon’s surface this time around, it’s kind of NASA’s golden ticket to the untouched reaches of outer space.

Pointed toward the sky and sporting the brilliant orange hue of its insulated spray-on coating, Artemis I’s SLS will carry instruments to lunar orbit to gather vital information for the Artemis II mission, which will bring humans along, to orbit the lunar sphere. Then, Artemis II will pave the way for Artemis III, a 2025 mission that may, at last, add more bootprints to the powdery gray soil, alongside those imprinted decades ago by Apollo astronauts.

And that’s just an overview of the first three steps of NASA’s Artemis odyssey.

Eventually, this program is poised to accomplish thrilling feats like planting the first woman and the first person of color on the moon, building a lunar base camp, constructing a spaceship in lunar orbit, connecting an off-world internet, and even laying the groundwork for a future in which humankind settles Mars.

“When we think about Artemis, we focus a lot on the moon,” Reid Wiseman, chief astronaut at NASA’s Johnson Space Center, said in an Aug. 5 press conference. “But I just want everybody in the room and everybody watching to remember our sights are not set on the moon. Our sights are set clearly on Mars.”

All things considered, Artemis I is such a big deal because the success of this mission will dictate the timeline for NASA’s sci-fi moon objectives.

The SLS is presently getting prepped for the big day on launchpad 39B, poetically standing where NASA’s Saturn V once stood for Apollo 10. Not only did Apollo 10 christen 39B, but it also illuminated the way for Apollo 11, Neil Armstrong’s and Buzz Aldrin’s later historical landing on the glowing orb (with Michael Collins orbiting patiently in the Command Module).

“To all of us that gaze up at the moon, dreaming of the day humankind returns to the lunar surface,” NASA Administrator Bill Nelson said during a press conference, “folks, we’re here — we are going back. And our journey begins with Artemis I.”

Here’s how to watch the launch live on Aug. 29.

Now let’s talk about some Artemis I specifics.

There are two major components to the Artemis I space explorer: an apricot-colored SLS rocket and a conical, white spacecraft dubbed Orion. Orion tops the SLS like the spire of a castle tower.

Within Orion, there’s a lot going on. It’s basically the cabin car of Artemis I.

Inside this uncannily retro craft, NASA strapped in Amazon Alexa, TV character Shaun the Sheep, a few Girl Scout space science badges and other pop culture icons. But on the other hand, the agency filled it with some hardcore science equipment, such as satellites, radiation detectors, human stand-ins, freeze-dried yeast for biology experiments and miscellaneous data collection tools.

Ultimately, the goal is for the superpowerful SLS to propel Orion toward lunar orbit.

During that trip, all the fun bric-a-brac will be baptized into the extraterrestrial club, science mechanisms will detail what the trajectory looks and feels like, and the humanlike mannequins will react to dangerous aspects of space travel, like radiation absorption, for assessment on the ground. Once complete, Orion is expected to safely splash down off the coast of San Diego.

If you’re into the technicalities, a detailed look at the SLS launch sequence can be found here.

This bit might be especially important if, as the agency hopes, the SLS and Orion design supports future missions written to one day access Mars, and maybe even deep space. According to Nelson, if Orion were to return to Earth from a Martian expedition, it might reach velocities around 36 times the speed of sound.

Lucky for us spacegazers (yes, I meant to not say stargazers), Orion also has cameras installed so we can watch what’s happening as it pursues its expedition. “We’re going to try and catch the Earthrise,” Rick LaBrode, lead flight director at Johnson Space Center, said excitedly in a press conference. “That’s a spectacular image.”

Even as Orion ascends from our planet, NASA will broadcast a livestream of the sights it sees. “We intend to bring each and every one of you along throughout the course of the mission,” Mike Sarafin, Artemis mission manager, said during the press conference. “We will share imagery both from the ground as well as the launch vehicle on the spacecraft throughout.”

Considering how much I write about the moon, I’ve often wondered what might’ve happened if NASA continued its Apollo program – uninhibited by Cold War tensions and budget-cut setbacks.

Could there’ve been an international space station orbiting the moon? Might there have been lunar settlements or perhaps ATVs astronauts could ride from crater to crater? Well, in a way, we might be about to find out. Artemis is sort of picking up where its Greek-namesake twin, Apollo, left off. (Apollo was a god, Artemis a goddess.) “This is now the Artemis generation,” Nelson said.

I mean, assuming everything goes to plan with all stages of Artemis, here are some things to look forward to in the coming decade or so. (OK, but to reiterate, a lot has to go to plan for any of this to happen.)

The Lunar Gateway
With the help of international space agencies from at least 18 other countries NASA signed the Artemis Accords. And part of this agreement, which basically underscores principles required for peaceful space cooperation, gave rise to an idea called the Lunar Gateway. The Lunar Gateway is a planned small space station that’ll sit in lunar orbit and serve as a solar-powered communication hub, science laboratory, habitation module for astronauts, holding center for rovers or robots and other such things. It’s like a moon ISS.

Already, in fact, NASA has sent a microwave oven-size satellite named Capstone to lunar orbit to tease out relevant information for the Gateway.

“Gateway’s capabilities for supporting sustained exploration and research in deep space include docking ports for a variety of visiting spacecraft, space for crew to live and work, and on-board science investigations to study heliophysics, human health, and life sciences, among other areas,” NASA said.

The LunaNet
We’ve also got the prospect of the LunaNet, which’ll serve the navigation, networking and other communication responsibilities of Artemis astronauts. “Astronaut safety and wellbeing are key concerns of the Artemis missions,” NASA’s search and rescue office mission manager for national affairs, Cody Kelly, said in a statement. “Using LunaNet’s navigation services, LunaSAR will provide location data to NASA distress beacons should contingencies arise.”

LTVs
Lunar terrain vehicles, or LTVs, are also planned for the future. These sort of roofless Jeep-like rovers will transport Artemis astronauts around the lunar South Pole when they get there. This invention is still very much in progress — understandably.

“Most people do a lot of research before buying a car,” Nathan Howard, project manager for the LTV at NASA’s Johnson Space Center, said in a statement. “We’re doing extensive research for a modern space vehicle that will be provided by industry. As we plan for long-term exploration of the Moon, the LTV won’t be your grandfather’s Moon Buggy used during the Apollo missions.”

Moon Base Camp
Perhaps the most exhilarating part of all of this is that if Artemis works out, we’ll have a legitimate base camp on the moon.

“To give astronauts a place to live and work on the Moon, the agency’s Artemis Base Camp concept includes a modern lunar cabin, a rover and even a mobile home,” NASA said. “Early missions will include short surface stays, but as the base camp evolves, the goal is to allow crew to stay at the lunar surface for up to two months at a time.”

Two months at a time, the agency said. It’s simply surreal to consider that the next many years could be filled with the level of lunar exploration that NASA believes the Artemis program can achieve. It might be why the punchy motto of these missions inspires goose bumps.