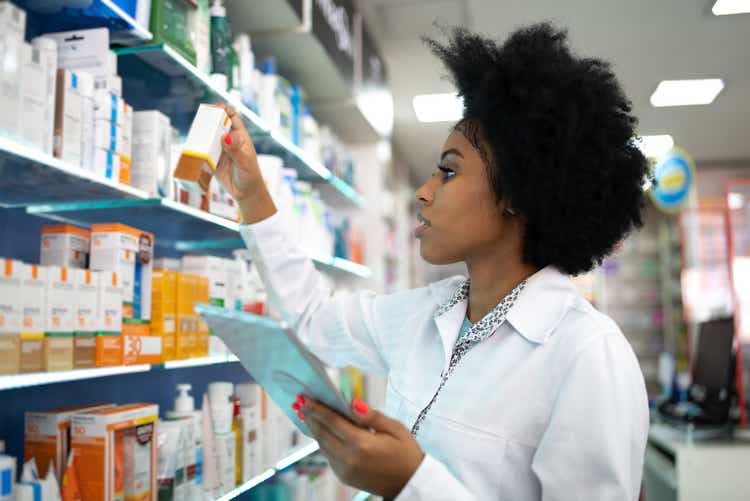 A year ago, I came to the conclusion that there is fertile ground for stocks. Organon & Co (New York Stock Exchange: OGN) in this premium article. Isolation from Merck & Co., Inc. (RTOs) seen some volatility trading after its spin-off and with stocks slightly lagging looked quite interesting.

Since the stock started trading on its own early last summer, with the stock showing some volatility in the $28 to $38 trading range in the first months after trading and trading at the bottom of that range at the time, I found the valuation enticing.

Organon’s spin-off within Merck was well-arranged as the spin-off procedure began in early 2020, allowing the company to operate separately under Merck’s management prior to the formal spin-off. Organon generated $6.6 billion in sales in 2020 from women’s health, including unintended pregnancy, treatment of women with peri- and postmenopausal symptoms, uterine fibroids, and more.

The business is organized into two segments, of which “established brands” is the largest segment with 49 products accounting for $4.5 billion in sales. The women’s health business generated $1.6 billion in sales from 10 products, including some biosimilars.

It is truly an international business, or better said, a global cash cow. About 80% of sales are made overseas as the company reports an Adjusted EBITDA of $2.8 billion, which means very high margins. While there are some concerns and concerns about exclusivity, the counterargument is that the product line is fairly broad, with real diversification as no single product generates more than 10% of sales. All was not well, however, as the company projected 2021 sales to fall from $6.6 billion in 2020 to $6.1-6.4 billion in 2021.

Based on $2.8 billion in EBITDA, I pegged post-tax cash flows to about $1.6 billion after deducting $200-300 million in capex, $400 million in interest expenses, and a tax rate of 25%. That number would bring earnings down to $6.50 per share, based on about a quarter of a billion shares outstanding.

Shares are trading at $33, which resulted in a profit increase of only 5 times, although falling sales and leverage were counterarguments. Leverage was a really big deal: at the time, net debt was $8.6bn, effectively over his $8.3bn equity estimate at the time, although that leverage was a manageable 3.1x EBITDA, though EBITDA is likely to be around $2.5 billion in 2021. , increasing the coefficients of borrowed funds by 3.5 times.

Weighing it all together, I thought the value argument prevailed as I initiated the position and after the stock hit a high of around $40 earlier this year, the stock is now back to $28/share and is changing.

Last November, the company announced a deal to acquire Forendo Pharma for just $75 million upfront, though regulatory and commercial advances could push the deal up to almost a billion. In February, full-year sales were $6.3 billion, and although sales were down just 3%, the adjusted EBITDA margin fell 10 percentage points to 38% to just under $2.4 billion. This translates into adjusted earnings of $6.54/share and GAAP earnings of $5.31/share, with many reconciliation points looking fairly fair as net debt has remained fairly stable at $8.4 billion.

The company forecasts flat sales of $6.1-6.4 billion in 2022, which is fairly stable year-over-year, but adjusted EBITDA margin is expected to be around 35% as this indicates further pressure on margins and EBITDA will be just under $2.2 billion. This results in a headwind of pre-tax earnings of around $0.80 per share, but earnings should still be around $6 per share on an adjusted basis, with the leverage ratio increasing on a relative basis.

The company cut its full-year sales guidance to $6.1-6.3 billion at the same time as it released its second-quarter results amid a stronger dollar. The problem is that the average EBITDA forecast is cut to 33%, which means that EBITDA is rapidly falling to the $2 billion mark. With net debt unchanged at around $8.4bn, leverage ratios rose 3x to 4x on the back of lower adjusted EBITDA.

The truth is, I understand the cautious business rates over the past year. While sales are holding up well, we are seeing EBITDA drop from $2.8bn to $20bn at the same time on the back of a strong dollar but noticeably softer prices.

With net debt flat over the past year amid poor cash flow conversions, absolute debt is flat and relative leverage ratios are rising, leading investors to be cautious in the face of higher relative leverage dynamics and rapidly increasing pressure on margins.

Despite all this, stocks have few green shoots in the short term as the long-term valuation argument remains and is actually really attractive as it was last year, but some real execution will be needed at some point.