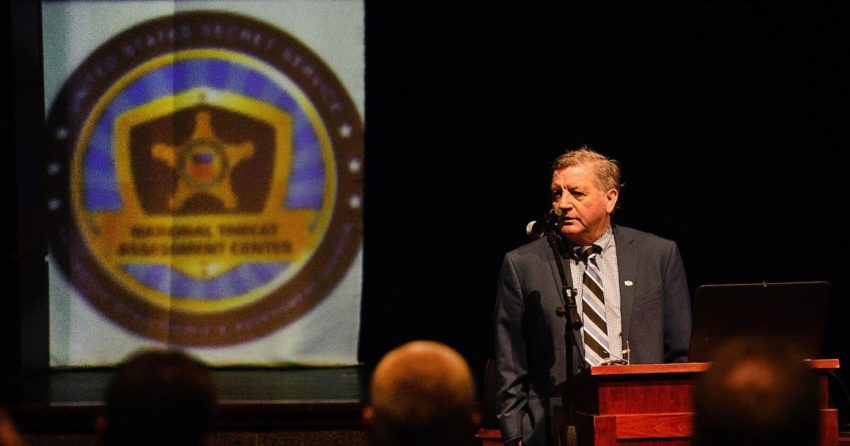 JONESTOUN, Pennsylvania. At Richland High School on Wednesday, officials from the U.S. Secret Service and the Department of Homeland Security reached out to regional school district leaders and first responders about preventing targeted school violence.

“This is phenomenal and I think it will be very educational for everyone here,” said Gary Martin, president of the Cumbria County Crime Organization. His group was one of the hosts of the event.

Martin expected the workshop to be “very productive for first responders and district leaders.”

He said, “It’s very important to our community that the Secret Service be here today.”

Domingues has covered public research on an interdisciplinary approach to identifying, assessing and intervening with students who exhibit threatening or disturbing behavior. This included a profile of the school’s attackers, a threat assessment history, and several other elements.

“One of the main takeaways… if you see something, say something,” Dominguez said.

She told the audience that attacks occur in all schools, from rural to urban, and that most of the attackers have specific grievances as their main motives, such as bullying. They also often do research and plan their attacks without sharing these ideas with anyone.

“Good for all of us”

Dominguez advised first responders and school leaders to develop a multi-step plan for such situations, including identifying prohibited and disturbing behavior, establishing a threshold for when law enforcement should be involved, and establishing a multidisciplinary team and investigation procedure.

She said one of the best approaches is proactive prevention through case management and education, which involves everyone from the superintendent to community members.

Michael Kapuscinski, Secret Service homeland security strategist, concluded this section of the program by telling the audience that his job is to focus on outreach, building and maintaining relationships because he and the rest of the team can consult on policy, give feedback and help in other ways. He also directed groups to visit www.schoolsafety.gov.

Arnold Nadonly, Superintendent of Richland, was honored to be able to host this event because his school offers a centralized location for districts in Appalachian Intermediate Block 8.

“It will be very useful for all of us to learn new information,” he said.

Michael Burgan, Chief of Police for the Township of Richland, expressed his appreciation for the workshop. There he had four officers who studied with specialists.

Burgan said the environment benefited both authorities and educators.

“Homeland security is hometown security,” Winters said. “Our job is to do the best we can.”

He said DHS can provide many useful services, such as site visits, infrastructure surveys, and advanced active shooter and response training.

Winters referred participants to www.cisa.gov/school-safety-and-security for important information and added that being able to collaborate early can help save lives.

The presentation by Martynuska and Kocis was about the new NAVIS system, which will provide the staff of the Cumbria County Emergency Management Agency with indoor mapping using 3D images.

“We have a few different options that we can use with our drones and our (UAVs),” Martynuska said, adding that county emergency personnel want to provide first responders with as much information as possible.

Kocsis said that with the new technology, which Cumbria County is working with several partners to implement, there will be opportunities not only to help first responders, but also to train.

“The morning was filled with great presentations with great speakers,” said Forest Hills School District Superintendent David Lehman. “We will work with these people and programs to help us maintain our commitment to school safety.”

He added that the event was “well planned” to bring schools and key community members together “to discuss the important topic of preventing school violence.”

Gregory Neugebauer, District Attorney for Cumbria County, said that with this kind of preparation, if there is a mass attack in the area, “we will be better prepared.”