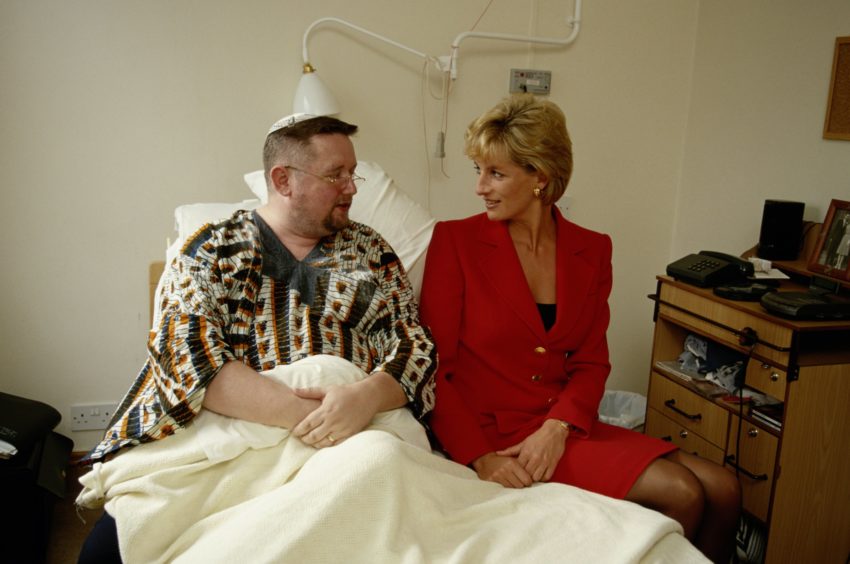 Diana’s activism has changed public opinion about HIV. I truly believe that we would not be where we are today without her. To honor her memory, it is imperative that we recognize her contribution to the fight against HIV and her incredible legacy.

Like many survivors of the height of the HIV epidemic, I was afraid of the virus. In 1983, I was 18 and explored my sexuality for the first time. By 1984, disinformation and hysteria had gripped the British public. The press demonized gays and bisexuals, calling the epidemic a “gay plague”. Sensational headlines like “I’d Shoot My Son If He Had AIDS Says Vicar” (Sun1985) humiliated people living with HIV.

At the time, we didn’t know how it was transmitted, and testing was in its infancy. By the age of 30, I had lost four friends to AIDS-related illnesses. The fear and paranoia were impossible to get rid of – it’s hard to understand how terrible it was then to be a young gay.

The treatment of people living with HIV at that time was nothing short of appalling. People died a lonely death, completely isolated in hospital wards. Families burned the beds of their relatives who died of AIDS-related illnesses and kept their closest friends away from funerals, and those with relatives who died of the virus were shunned by the local community. This is why Princess Diana’s union meant so much to people living with HIV. It was a member of the royal family, one of the most famous people in the world, who fought for a community that was so vilified.

In 1987, the same year that the UK government launched the public health campaign ‘AIDS: Don’t Die of Ignorance’ which featured tombstone ads, Princess Diana opened the UK’s first dedicated HIV unit at London’s Middlesex Hospital. During her visit, she shook hands with a patient who was terminally ill with an AIDS-related illness.

She later said: “HIV does not make people dangerous to knowledge. You can shake hands with them and hug them. Heaven knows they need it.” This level of compassion for people living with HIV from a member of the royal family was unprecedented. Diana used her high profile to challenge the toxic narratives being spread by the media and sent a clear and definitive message that the virus cannot be transmitted through touch.

Public opinion did not change overnight, and unfortunately the stigma against people living with HIV persists today, but the influence of the princess was felt by many.

Diana regularly visited London’s Beacon Hospice, which opened in 1988 and offers day care for people living with HIV, to offer her support. In addition to her highly publicized visits, which helped lift the HIV stigma and change the conversation about how the virus is transmitted, she often came to Mayak without the presence of the media and only accompanied by a security officer.

Her personal secretary called ahead and she entered through the back door to spend time with the seriously ill, many of whom had been expelled from family and friends. Diana stayed there for hours – her visits were very comforting to people living with HIV and staff. Her compassion was inspiring.

I had the good fortune to meet her in 1992 when I was Ealing’s councilor. She was attending a homeless relief project, and I told her how the local government is supporting it. Then she turned, looked into my eyes and said, “Of course the council will continue to support this, right?” She put me in my place – in a very good way. Luckily, I was able to say, “Of course we will.”

I was diagnosed with HIV in 1996. I was 30 years old and they told me I had up to eight years to live. It turned my world upside down and I mourned the life I expected. I went through what many before me have experienced since the beginning of the epidemic.

But in 1996—the same year I was diagnosed—an effective, life-saving treatment for HIV was finally found. It wasn’t easy – medicines at the time came with a long list of side effects – but it got better and better every time. Thanks to advances in treatment, I know that I can live as long as anyone else and that I cannot pass HIV on to my husband. I wish Diana and all the others who died too soon lived to see such tremendous progress.

I will never forget what Diana did for all of us living with HIV. If she were alive today, I’m sure she would be at the forefront of efforts to combat the stigma surrounding HIV, which is all too common.

Ian Green is the CEO of the Terrence Higgins Trust.