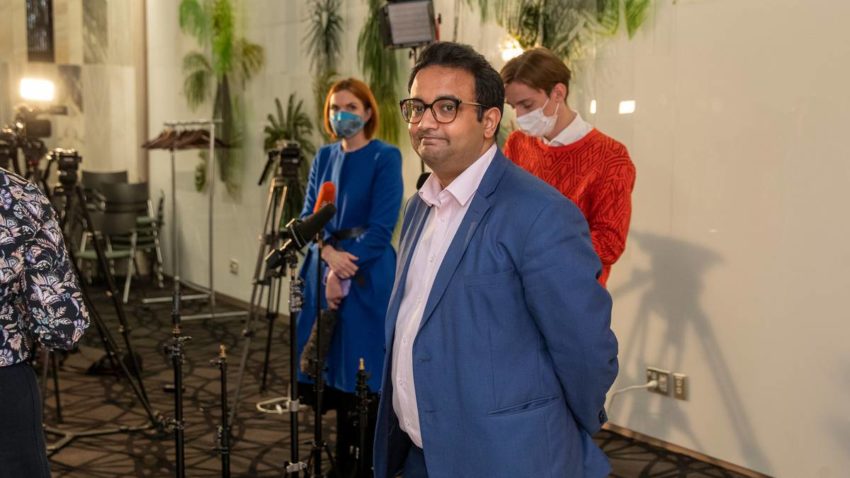 Spotlight: The Prime Minister speaks to the media after Gurav Sharma was expelled from the Labor caucus. Video / Mark Mitchell

Our story begins in the second century of the dynasty of Queen Jah Sindh, when all seemed well in King’s Landing. No power could stand against him, if only because the opposing forces had gathered
The Luxon houses were a hell of a toxic mess.

But the Queen knew the cold truth. The only thing that could destroy House Ardern was himself.

The Queen’s Hand, Kiran of the House of Makanulti, approached the Iron Throne and said, “Your Grace, what shall we do with Gaurav of the House of Sharma? He refuses to bend the knee.”

She ran her finger down her throat.

They came for Gaurav under the cover of darkness and threw him out of his nice warm Labor bed.

Gaurav was exiled to the distant polar wastes of King’s Landing.

A rider rode up on a mule. It was the always smiling David from House Twerk. He gave Gaurav blankets and hot chips. “Join us, friend,” he said. “We will listen to your pathetic bleating if it suits us.”

Gaurav said through tears of gratitude, “I will definitely think about it. Thank you for thinking of me! Me, me, me!”

Gaurav spent the day happily accepting gifts from all the opposing forces in King’s Landing.

He ate chocolates, admired his new collection of ermine coats, and was especially pleased with a series of full-length mirrors.

Christopher of the Luxon house sat down with his new friend and filled the bowl with honey. “My understanding is that the mirrors were a gift from the newly formed Freedoms NZ party,” he said. “They seem to be reasonable people. I wouldn’t rule out collaborating with them. Imagine us all together storming King’s Landing, overthrowing Ja Sinda, and seizing the Iron Throne!”

“With you by my side like the Hand of the King,” Gaurav said, his face beaming.

“Yes, something like that,” replied Christopher of the Luxon house as he refilled Gaurav’s cup.

Queen Ja Sinda consulted Kiran of the House of Makanulti.

“You had no choice but to get rid of him, Your Grace,” Ruka said.

“But I have unleashed a dark fury that threatens my reign.”

“You want me to silence him? I have ways to slam a man’s trap. Devilish ways, the most cruel and at the same time delightful.

– Not. Let him speak. The more people hear him and understand his character, she said, the better for us.

Our story ends with an unusual proposal. The hand bent the knee.