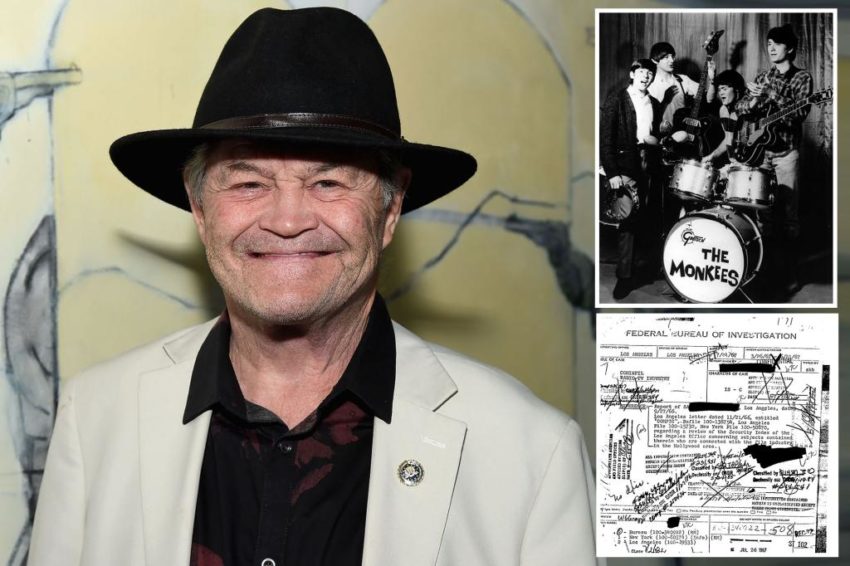 He doesn’t play around anymore.

Mickey Dolenz of The Monkees sued the Justice Department on Tuesday to try to get secret files the FBI gathered about the pop rock band when they protested the Vietnam War during their 1960s counterculture heyday.

The 77-year-old singer – the only surviving member of the made-for-TV band – filed a lawsuit in Washington, D.C. federal court after his attempts to obtain records under the Freedom of Information Act were ignored, legal documents say.

“This lawsuit is for any records the FBI has created and/or has of the Monkees and its individual members,” it says of the “famous and beloved rock band.”

The FBI website confirms that the group appears in two files, one of which is mysteriously “fully redacted”.

The other is a 1967 Los Angeles field office memorandum that was released in a heavily redacted form in 2011—unknown at the time to Dolenz and his attorney.

The misspelled subject “THE MONKEYS” in the file said they studied “four young men who dress like ‘beatniks’ who ‘sang like ‘combos'”.

An FBI informant, whose identity has been redacted, detailed how The Monkees played live with “subliminal messages” on stage, which “represented a ‘leftist intervention of a political nature’.”

“These posts and photos were linked to the Berkeley riots, anti-American posts about the Vietnam War, race riots in Selma, Alabama, and similar posts that generated an unfavorable audience reaction,” the file says.

There was no talk of further action.

Dolenz was unaware of the redacted document’s existence when his lawyer buddy and self-proclaimed “big fan” Mark Zaid first offered on a whim to check if the FBI had a file on him, Zaid told Rolling Stone.

This redacted document “just reinforced me that there really is something here,” Zaid told the rock magazine.

“This is not just a fishing expedition. I mean, we’re still fishing, but we know there are fish in the water,” he said, acknowledging that the fully redacted document “may be of secondary importance” to the group.

“Theoretically, there could be anything in these files,” Zaid said. “We have no idea what records even exist. It could be next to nothing. But we’ll see soon.”

The lawsuit noted that Dolenz and his late bandmates – Michael Nesmith, Peter Tork and Davy Jones – hung out with other FBI-monitored rock stars such as Jimi Hendrix and John Lennon.

And despite being a fun pop group, The Monkees also brought an anti-war vibe to chart-topping songs like “Last Train to Clarksville,” Zaid said.

The FBI at the time “was notorious for keeping tabs on the counterculture, whether or not they committed illegal acts,” the lawyer said.

The FBI did not immediately respond to a request for comment.