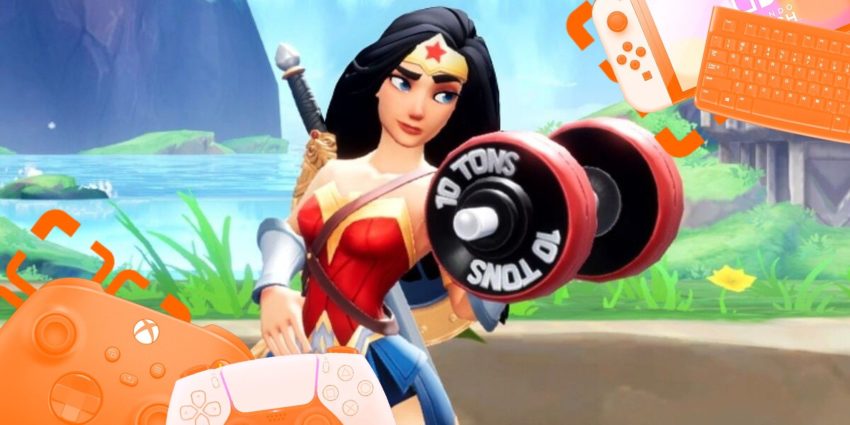 The weekend is here, and, you know what that means? Time to play like there’s no tomorrow.

Some TheGamer staff are using this weekend as an opportunity to take time out for 2022 releases like MultiVersus, Rollerdrome and PowerWash Simulator. Some of us are reminiscing about old games (with sevens in their titles) like Cyberpunk 2077 and Killer 7. Some of us are revisiting past entries in the series that will get a new entry soon, like Star Wars Jedi: Fallen. Order and Yakuza 4. And at least one of us plays the critically acclaimed MMORPG Final Fantasy XIV.

RELATED: MultiVersus is the perfect introduction to platform fighters

I’m back in Night City and am nearing the end of Cyberpunk 2077’s Act 2. This weekend I’ll be finishing up a bunch of side quests that I missed on my original playthrough and just vibrating and listening to jazz. There’s a review game that I’ll be finishing as well, but I can’t talk about it until next week. And I’ll probably go see 3,000 Years of Longing, the first movie directed by George Miller, the director of Mad Max: Fury Road, in seven years. Reviews are mixed, but I hope I enjoy it.

You’re probably tired of my Formula 1 talk. Honestly, I can’t blame you, but most of this weekend I’ll be playing F1 22. I mean, how could I not? The summer break is finally over and the teams are back in business, this time for the Belgian Grand Prix. I plan to start from tomorrow at Spa, cutting those fractions of a second at every turn and turn. The spectacle and sounds of the race are impossible to replicate, but since I am far outside of Europe, the next best option would be F1 22.

I just fought a bear in Yakuza 4. Not a big bearded grizzly or something, but a big brown bear. With my fists. It was after I left on a snowmobile after escaping from prison with thugs who were also trying to lead me astray. Considering that when I started this Yakuza series in Kamurocho, dealing with the internal drama and conflict between Kiryu and Majima, it was a little funny to see how crazy the main story got. But I’m here for this. I fought the bear and emerged victorious.

In honor of the end of Kenobi and the fact that I finally made it all the way through Star Wars Rebels without hitting the screen or giving up, I’m pulling Star Wars: Jedi: Fallen Order from my backlog. As for the build news for the next installment, I found myself unable to put it off any longer (not to mention I got home from a trip and finally got access to a decent computer to play it)! While I find the gameplay reminiscent of many other modern games and not super innovative on its own, I’ve never been able to resist a good Star Wars story – ever since I was a little girl devouring the Thrawn trilogy and The Young Knight series. – Jedi.

I did it. It’s done. I completed the PowerWash Simulator. Cleaning this last level was the most cathartic experience of my life, except for a few other real life moments that could actually be considered more cathartic than anything I felt while playing a video game about using a pressure washer to clean dirty surfaces. Anyway, yes, I completed the PowerWash Simulator career mode. But who said the detergent fun had to end? I have four additional special levels to complete before I officially end the game. I don’t have to say goodbye yet!

I’m spending this weekend with my new best friends: Rollerdrome and MultiVersus. I think that the days when I managed to get into the top ten on the rollerdrome, unfortunately, are behind us. But this weekend I’m going to do another push. As for MultiVersus, I need to keep practicing so I can take out a few of my co-workers who May recently they took me to the city for a team tournament. You will regret this day, George and Eric!

I’ve been doing JRPGs for what seems like forever, so I went and dived into something a little weird – a little weird. I put a Killer 7 in my GameCube for the first time in a decade. It was a great time. I’m going to be not just one killer, but a family, in a crazy conspiracy involving some dude named Harman and a bunch of exploding zombies. As someone who often has multiple assassins vying for control of their body, I have to say that I felt very personable playing Killer 7. The strange ghostly rigmarole was a memory I’m glad I suppressed and regret unearthing , mind you.

With the release of the highly anticipated Update 6.2 for Final Fantasy 14 and the source of fresh content it brings, I’ve had a lot of fun… Instead, I’ve started the game from the beginning. After all, no one has ever accused me of being smart. I’m looking forward to the next batch of main story quests, as well as Island Sanctuary, but I’ve been feeling the call to replay the epic story for a long time now. I’m already giggling at a few lines that seem like lore sketches only to hit three expansions hard in the future. Oh, and I’m on Balmung now. So, you know, if I ever get the urge to raffle off buying a cup of coffee from a well-dressed barista, all I have to do is teleport to Lims Lomins and take ten steps in any direction.

I love being a guide writer. In a way, it’s like trying to understand how the game works on a “molecular” level, to understand all of its systems and mechanics. Find out what the development team was thinking. Also, I hate being a manual writer. It’s like trying to figure out how a game works on a “molecular” level, and that game is sometimes pretty damn hard. This is what happens to me with Escape From Tarkov, a multiplayer FPS with battle royale, RPG and MMO elements that bulldozes me in the face every time I sit down to play. Playing as the main character, you appear on one of the few, but very detailed maps, trying to get things and survive the attacks of other players. The “only” problem is that it plays realistically like almost nothing I’ve played in my entire life, and when you die from a single bullet in your eye, you lose all of your equipment (with a few exceptions). Few events in my gaming life have been so tense and nerve-wracking.

Hopefully, by the next issue of this column, I will feel better.

NEXT: I hope Saints Row didn’t dig its own grave