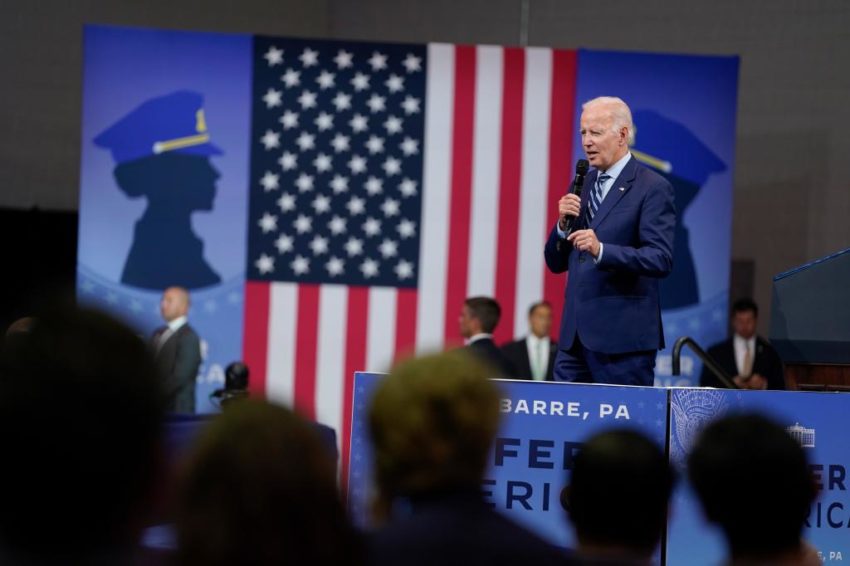 The audacity of Joe “Antifa” Biden, who donned blue after the violence against the police and the movement for the release of the police, which he slyly incited during the 2020 BLM/antifa riots. The consequence of this is the violation of law and order in our cities.

Now he’s once again posing as a big cop advocate, an anti-‘semi-fascist’ (AntiSeFa?) trying to turn the tables of the law and order party with wildly dishonest rhetoric as frightening as it is absurd.

It would be easy to ridicule this as the chatter of a vicious, increasingly incoherent, angry old man.

But what Biden and the puppeteers who guide him are doing is very sinister. It looks like they are preparing the ground for an even tougher suppression of his political opponents by the power structures, which, apparently, have become his secret police.

The President’s rampant attacks on Republicans as “semi-fascists,” “ultra-MAGAs,” “white supremacists,” and “domestic terrorists” have escalated as mid-term destruction looms, and Biden’s deadly polls have solidified despite hagiographic The media is praising the return of the Aviator. Joe.”

Yes, sure, his polls have “bounced back” – as have gas prices, ranging from incredibly bad to very bad. Apparently, two weeks in the double COVID basement and a month on vacation did wonders for his popularity. In Biden’s case, the absence makes his heart grow a little less contemptuous.

But before he heads to Delaware for another long weekend, the White House has decided that Biden needs to make a couple of big political speeches to set the tone for the campaign season.

Thursday night, it’s a prime time speech about the “ongoing battle for the soul of the nation,” as if any American wants a moral lesson from Biden.

His speech on gun control in Pennsylvania on Tuesday was the opening of a scene that should fill everyone with horror.

The President has spent most of his time on stage speaking out against the “MAGA Republicans,” inadvertently uniting all who believe in an “America First” agenda that includes quite a few independents and some Democrats.

“Let me say to my MAGA Republican friends in Congress, don’t tell me you support law enforcement unless you condemn what happened on the 6th. [of January]”, – said Biden. – For God’s sake, which side are you on?

Have mercy on us.

He lied about the January 6 Capitol riot, describing it, in an alleged quote from some unnamed foreign leader, as “a crowd of thousands storming the corridors… . . and in the meantime killed several policemen.” Not a single policeman died. The only person killed was Ashley Babbitt, a diminutive unarmed Trump supporter who was gunned down by a Capitol police officer.

He sarcastically referred to the “brave American right” who support the Second Amendment as a defense against government tyranny. “If you want to fight against a country, you need the F-15.”

He tried to turn the tables on rising crime and the demoralized police that his party had single-handedly called in and pretend they were his strengths, just like the old days when the arsonist returned to burning coals as a firefighter hero.

“I am against ending police funding,” Biden said. “I’m also against stopping funding for the FBI.”

Now he tells us. Why didn’t he say this during months of violent anti-police riots in 2020?

Instead, he ignited anti-cop sentiment the minute the George Floyd story exploded.

Periodically, he would come out of his basement to rant about systemic police racism for which there was no evidence. After weeks of rioting, arson, looting and death, in the midst of a defund police frenzy, he replied “Yes, absolutely” when asked if we could “redirect some of the [police] financing?”

Who is he trying to fool now?

Biden’s speech on Tuesday was no random wild talk. It was designed for the ultimate goal of deploying his administration’s year-old National Strategy to Combat Domestic Terrorism in order to crush his political opposition.

In this strategy, the semi-fascist MAGA is the unprecedented threat to the nation, and the way to counter it is fundamentally to install a far-left program of “justice”, economic redistribution, critical racial theory, etc.

If you object, as any thinking person does, you could be labeled a domestic violence extremist or “enemy of the state,” as Nancy Pelosi called the Republicans.

The strategy’s only critic is political science professor Nicholas Giordano. Democrats’ criticism of Republicans has gone from “evil hangers-on” to “domestic terrorists,” he said.

“This is a coordinated and consistent effort to present their political opponents as a threat. . . seize power.”

The media amplifies the drumbeat of government, justifying tyrants so they can tell themselves they are doing good, ridding the nation of racism and injustice, saving democracy from existential threats like Ashley Babbitt.

That’s why they have to lie about January 6th and call it an uprising, a terrorist act worse than September 11th.

That’s why, as Giordano points out, you hear the terms “purge”, “deprogramming” and “reeducation” applied to Trump supporters by the talking heads on MSNBC.

But since there aren’t really enough white supremacist and domestic violence extremists (DVEs) to purge, the security state has had to scale up. As such, the patriotic “Betsy Ross flag” is secretly listed in an internal FBI handbook leaked to Project Veritas as a “symbol of domestic violent terrorism” along with a “punisher’s skull”, a Spartan helmet, a Gadsden flag, and “2A” for the Second Amendment.

The word “Orwellian” is now overused because all our politics are Orwellian. Everything is not what it seems. Every statement is a psychological projection. Every day is the opposite of a day. Biden gaslighting and lying. Everyone in his administration is gaslighting and lying. We are told that the border is closed, that millions of illegal migrants do not cross the southern border, that Hunter Biden’s laptop is Russian disinformation, that the COVID vaccine will stop the virus, that inflation is zero.

Lies are the architecture of tyranny.

As Russian émigré Yelena Gorokhova wrote of the Soviet Union in the 1960s, “The rules are simple: they lie to us, we know they lie, they know we know they lie, but they keep lying to us, and we keep doing it.” look like you believe them.”