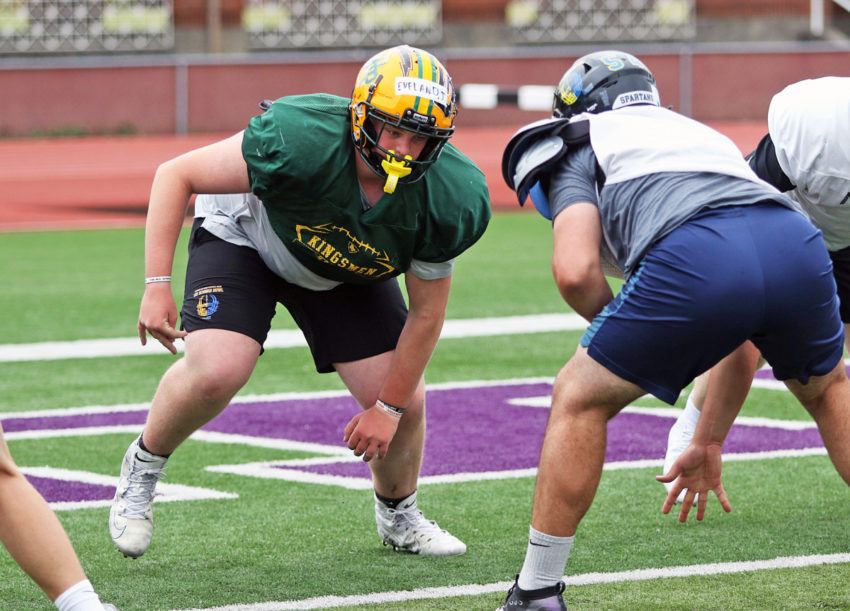 In the past four weeks, we’ve highlighted over 100 teams and over 1,000 players in Oregon High School Football.

Now we want to hear from you: who will emerge as the best player in the 5A Northwest Oregon Conference this season? Vote below and let us know who you think will be the top NWOC star in fall 2022.

We will send a free SBLive T-shirt to the winner of this survey! (Voting closes at 11:59 pm on Friday, September 16th and we will announce the winner next week.)

Snoderley led the Cougars and finished second in the conference in tackles last season (97, eight for a loss), earning first-team NWOC West recognition in the defensive line. (Team Canby preview)

Souls has put on a lot of weight since last season when he was one of the best players on the team (33) and had three steals on the team. (Team Canby preview)

In the spring of 2021, Boyd played quarterback and returned for another season as a wide receiver, where his ability to catch passes stands out. (Team Centennial Preview)

Big things are expected when coach Butch Self’s son gets behind the wheel of the Eagles’ triple offense. Joshua Self attended Manning Passing Academy for the second consecutive year. (Team Centennial Preview)

Hale returns as the Vikings’ No. 1 quarterback after completing 51 percent of his passes and throwing 13 touchdowns (with nine interceptions) in his sophomore year. (Team Forest Grove preview)

Rebsom was second on the team in receptions and touchdowns last season and threw two defensive interceptions as a safety. (Team Forest Grove preview)

Fronert returns as a two-way starter, middle linebacker and receiving underdog. He was the Vikings’ top player last season and made 10 tackles in each of two games. (Team Forest Grove preview)

Playing in seven games as a junior, Blanton was the Vikings’ leading running back last season with 5.2 yards per carry, four points and a touchdown. On defense, he was the second-best player on the team and had five tackles to lose. (Team Forest Grove preview)

Last season, Oberhelman went from a reserve player to a regular player, catching balls on offense and playing hard on defense. More is expected of him this season. (Team Forest Grove preview)

He was awarded an honorable mention in all offense conferences last season with 45 field goals. He is also an outstanding midfielder. (Hillsborough team preview)

He has more than name and class with Doran – Echeverría has also received an honorable mention in all conferences (the team’s five rushing touchdowns) and excels defensively. (Hillsborough team preview)

Burns started running back last season and was second on the team in yards and touchdowns behind NWOC East’s top hitter Trenton Hughes. (Preview by the Hood River Valley Team)

Yaulualo was a sophomore on the NWOC East first team in the offensive line. Last season Iaulualo weighed 285 pounds and is 6 feet 3 centimeters tall and has now shrunk to around 250 pounds. (Preview by the Hood River Valley Team)

Boydston is starting his third season as a starter at center, where he is a reliable shooter in the Eagles’ pistol kit. (Preview by the Hood River Valley Team)

Von Lubken became a second-team linebacker for the NWOC East last season. Von Lubken will also be asked to contribute to wide receiver this season, where he briefly worked last year. (Preview by the Hood River Valley Team)

The 6-foot-3, 195-pound Selfforce was selected to the NWOC East First Team last fall and should be one of the NWOC’s most devastating pass rushers this season. (Team Putnam Preview)

Baldwin led the Kings in three games last season. He was then disabled due to a persistent shoulder problem that required rest for it to heal. (Team Putnam Preview)

In his first season as a starter, Bickford passed for over 1,000 yards last year and tied for third in the NWOC East with 13 touchdown passes. (Team Putnam Preview)

Bauman is very similar to Creswick – another junior who will play a major role in defense and defense. (Team Putnam Preview)

Eveland – almost 6-7 and about 305 pounds – was on the first team of all conferences in his freshman year and attracted interest from BYU, Oregon, Oregon State and Washington. (Team Putnam Preview)

According to Kingsmen coach Tim Jacobs, Pratt was second-team NWOC East as a junior and has been on an upward trajectory ever since. (Team Putnam Preview)

Tucker led the Skyhawks in receiving yards (459) last season, averaging 14.8 yards per catch and throwing three touchdowns. He also had the best four interceptions on the team and finished fourth on the team in tackles, earning third-team All-Metro recognition on defense. (Soutridge team preview)

Sunft (6-3, 300 pounds) is the biggest player on the Skyhawks and he will use the tackle on both sides of the line of scrimmage. Last season, he was named third-team All-Metro defense. (Soutridge team preview)

Last season, Powell was the second All-Metro at linebacker when he led the Skyhawks with 65 tackles, including three losses. (Soutridge team preview)

Hiday was the NWOC West first team wide receiver last season when he led the Wildcats with 814 receiving yards (26.3 yards per catch) and nine touchdowns. On defense, he led the team with two interceptions. (Team Wilsonville preview)

Crowley started early in his season as a freshman and finished with 19 catches for 217 yards and two touchdowns. (Team Wilsonville preview)

Seale started every game on offense as a sophomore and plans to play a key role again in a division that has produced four players with significant game time. (Team Wilsonville preview)

McElroy finished last season with 36 tackles (seven for a loss) and 5½ sacks, and one of two fumble returns returned a touchdown. (Team Wilsonville preview)