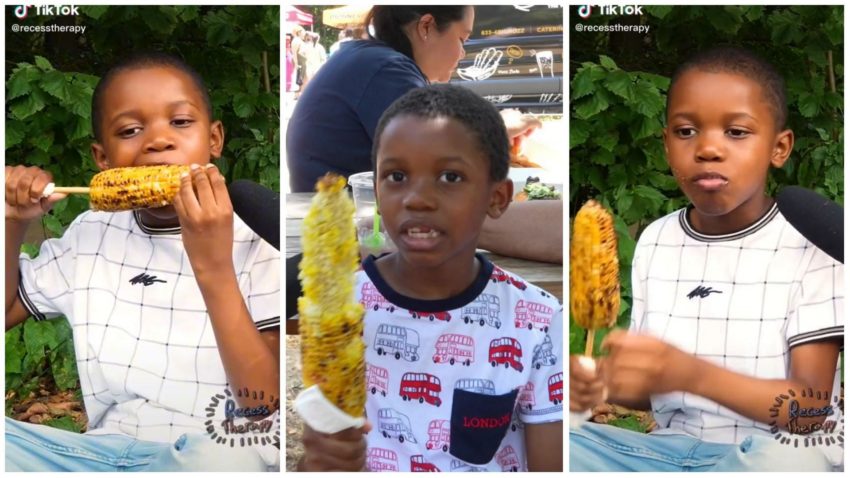 The little boy went viral on social media because of his love for corn and now his video has become a viral trend.

Julian Shapiro-Barnum, host of @RecessTherapy, spoke to a little boy named Tariq who was enjoying an ear of corn. When asked what he likes about this vegetable, Tariq replied:

Tariq’s pure and blissful answers went viral on the app. Later, another creator turned it into a song and it has since gone viral on TikTok.

People use sound to describe what they love about life, including food, exercise, cars, and even life itself.

The Corn Song is a viral TikTok audio.

Another user @Schmoyoho created a song from the interview. Schmoyoho is the same user who created the viral meme song “Chrissy Wake Up”.

He added some music and background singing to make the song catchy. His song went viral and people showcased what they like using the song as a background. His video has received over 5.6 million likes and has been used in over 151,000 videos so far. Even celebrities like Ashley Tisdale have taken part in this trend.

What is the origin of the viral song?

Julian’s content revolves around interviewing children and asking them questions on a variety of topics.

In one of his recent videos, where he approached a child enjoying an ear and asked what he liked, the child gleefully replied:

Julian then asked him what he liked about them and got an answer with an explanation:

“Ever since I was told it was real, it has been delicious! And then when I tried it with butter, everything changed! I love him. Mmm”.

Julian then asked Tariq if everyone should eat vegetables. The kid said:

“No, not everyone has to like it to be the best. You just have to try it. Take a bite!”

Then he picked up the half-eaten cob and exclaimed:

“I mean, look at this guy. I cannot imagine a more beautiful thing. It’s corn!”

Julian then asked the child to describe the vegetable to someone who had never tasted it before, and the child replied:

“Big lump with bumps… and it has juice in it!”

When asked how much his favorite food should cost, the kid replied:

“One dollar. Hope you have a delicious corn day!”

Then he took a big bite of the cob and smiled for the camera.

The video went viral thanks to the kid’s adorable responses and has racked up over 577,000 views since it was posted.

After seeing the success of the video, he made another video with the same child.

Then they took part in a small dance and regained their energy with the help of corn. They also had a small discussion about why this vegetable is so important for a child.