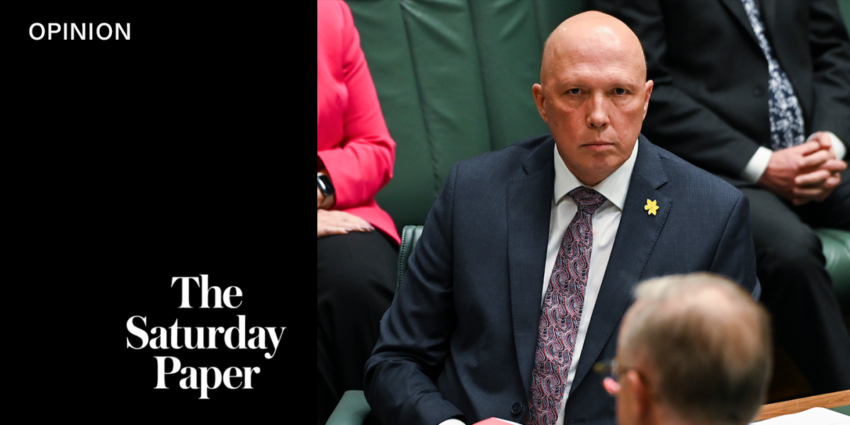 The acquisition and exercise of power must entail considerable responsibility. As Abraham Lincoln said, “Almost all men can endure adversity, but if you want to test a man’s character, give him strength.”

It is only reasonable that Prime Minister Anthony Albanese was eager to understand how and why Scott Morrison so easily sacrificed the essence of our style of government, destroying the conventions of transparency, ministerial appointments and accountability by secretly appointing himself to several portfolios. Albanese needs to determine what action may be needed to ensure this doesn’t happen again. But it should be clear that Morrison’s actions were nothing out of the ordinary. His initial selection was a quest for power, as he lost in the official vote to Michael Touk, a Lebanese Christian, and finished last in the area with an 82–8 record. A nasty smear campaign then allowed Morrison to replace Touk, largely due to the party’s view that it would be unwise to nominate a Lebanese candidate for Cook so soon after Cronulla’s race riots.

It seems that the leader of the opposition is just happy that Morrison continues to sit on the bench, attracting devastating and damaging attention to himself. Dutton has to wonder what else lurks in the dark – how deep is the basement?

Albanese responded to the Solicitor General’s damning report on Morrison’s conduct with a commitment to further investigation of the matter by an “eminent” expert in law that would not be political but would follow due process. He had little alternative, given the persuasiveness of the Solicitor General’s report, which shows that although Morrison had broken no laws and was legally appointed to office under section 64 of the constitution, he had “fundamentally undermined” the principles of responsible government. By not notifying the public or Parliament of his maneuvers, he made it “impossible for Parliament and the public to hold ministers accountable”.

In addition, contrary to Morrison’s recent claim that self-proclaimed powers are irrelevant because he has not used them – except for the one time he blocked an offshore gas project – the report also makes it clear that undermining a responsible government “regardless of the extent to which Mr. Morrison used his authority.”

I think it’s also important to define what Morrison has done with this boosted capacity in the Health portfolio. So, regardless of the advice from the Prime Minister’s and Cabinet Office and the Solicitor General, I suggest that a detailed review of pandemic management be a priority – at least to be better prepared for any future pandemics. .

Morrison claims that he usurped these additional powers as a kind of “insurance” that is, “as protection against broken glass in case of an emergency.” At first glance, however, there is little to indicate that these forces were used when they could or should have been used. They could reasonably be expected to be deployed in two key emergencies: quarantine failures and vaccine deployment failures. Indeed, this reticence is inconsistent with Morrison’s recent explanations of why he has taken on additional portfolios and his performance during the pandemic. He consistently denied responsibility for these failures, preferring to blame the states and others. This denial was never plausible: his government’s quarantine duties were widely accepted as being codified in section 51 of the constitution. Its failure to provide adequate, purpose-built facilities for all of the quarantine has actually prompted states to develop far less effective alternatives, such as hotel quarantines, with all the problems that come with it.

Morrison’s work on vaccine deployment was just as hard to defend. He and then Health Secretary Greg Hunt bragged about how many millions of doses they agreed on and the tight deadlines they set for deployment but failed to deliver. It seems that in fact the deals were never made, the declared obligations were not real. If Morrison was indeed sincere in his emergency powers, we are left wondering why he did not step in and contact the senior management of the relevant pharmaceutical companies such as Pfizer and Moderna, as the leaders of other countries did?

Any reviews must be bipartisan and stand above everyday political points. Instead of looking at the previous government, the question should surely be where is Peter Dutton and the party he leads in this matter? Those who were not informed of the seizure of their portfolios, as well as many other members of parliament, are understandably outraged at having to go back and explain such extraordinary behavior to their constituents. So again, where is Dutton? Or was he, like former Deputy Prime Minister Barnaby Joyce, simply left to find out “indirectly” over time? And if so, what were the terms of his understanding and how did he then react to this information? It seems that the leader of the opposition is just happy that Morrison continues to sit on the bench, attracting devastating and damaging attention to himself. Dutton has to wonder what else lurks in the dark – how deep is the basement? Millions of liberal voters look to him to see how he will run the government, how he will lead. What are his views on responsibility, transparency, honesty and accountability? Can his ministers be sure that they will be able to carry out their work in accordance with custom, or is Morrison’s way a new way? Many of us would not like to think that all the efforts of many people in the past to uphold the values ​​and principles of the Liberal Party were in vain. It is a tragedy that their selflessness was so easily squandered.

It is clearly unfair for the media to accuse Albanese of being fixated on Morrison. Undoubtedly, the preservation of our system of government is important enough to get his attention, and it is the responsibility of the media to investigate and report the details of what actually happened and why, objectively and accurately. Those who sat on a story for a couple of years and did not break it until the election – and all for the sake of selling a book – should not have a job in journalism.

Dealing with such issues requires a certain degree of political bipartisanship and a desire for journalists to act as such, rather than being supporters of their chosen team. The cost of living is still the dominant issue, but it’s a cheap argument to ignore the issue. And it’s the pitiful need for a good shot that is the driving force behind the bad behavior we’ve all grown so tired of during the campaign. We all know that bread, milk, meat and toilet rolls are more expensive – everything is expensive – but watching the opposition and some journalists try to trap Albanese over the cost of living, a huge problem he inherited, is ridiculous.

With all the power he’s usurped, why didn’t Morrison and his team try to do more about inflation? Can we really believe they didn’t foresee this? They have consistently claimed to be better at managing the economy, while also allowing themselves to deal with the devastating cost of living problem, as they have done with many other problems, including caring for the elderly and the disabled. It is noteworthy that Morrison did not capture these portfolios.

It is very unfortunate that this kind of Trumpian behavior – ignoring conventions, disregarding laws and standards of good governance – has become a common feature of political leadership.

Like British Prime Minister Boris Johnson with his lockdown parties, Morrison and his hodgepodge tried to get us to come to terms with horrendous behavior. How deep is this hole? Of course, Lincoln never imagined Donald Trump and Winston Churchill never imagined Boris. And I don’t think Robert Menzies or Gough Whitlam could come up with anyone as destructive and self-serving as Morrison.

This article was originally published in The Saturday Paper on August 27, 2022 under the title “Shuffling the Sunbeds”.

Free press is what you pay for. Now is the time to subscribe.