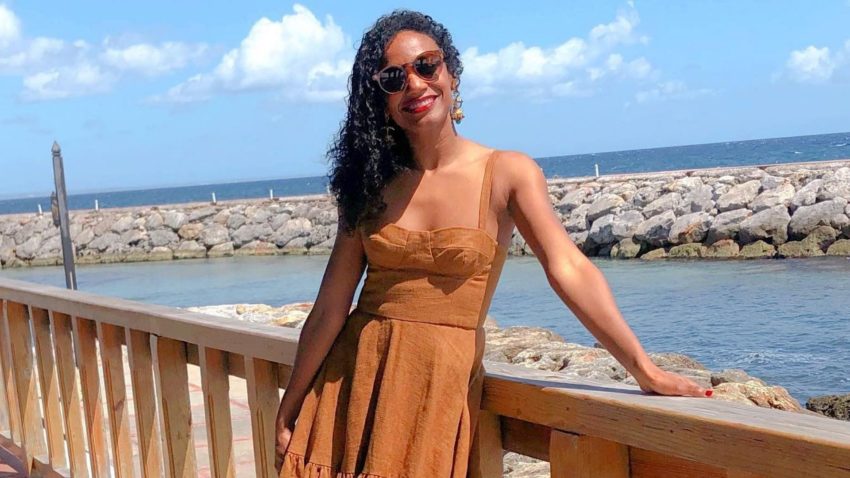 Making a cut Season 3 is well under way since it premiered last Thursday. In addition, the show will continue to feature aspiring fashion entrepreneurs who face brainstorming challenges to eventually win the show.

One of the participants in the competition is Jeanette Limas, a native of the Dominican Republic, who used to sew clothes from curtains.

season 3 Making a cut it’s all about creating high fashion looks that will fit both the casual and glamorous mood in the fashion world. Each week, contestants must design runway-inspired clothing, which will be assigned to them by judges Nicole Richie, Jeremy Scott, and Tim Gunn. The winners of each round will be featured on Amazon Fashion for a limited sale.

“Season 3 will feature a new group of 10 entrepreneurs and designers from around the world who are ready to take their new brands to the next level and become the newest global phenomenon.”

Jeanette Leamas from Making a cut manages his own clothing brand

Jeanette Leamas went to school at the Jacquez Mercy Institute, where the focus was on model making. After that, she enrolled at the Altos de Chavón School of Art, where she received the Young Designer of the Year award upon graduation. By winning it, she received an incentive to present her first collection at Dominican Fashion Week.

In addition, she received a scholarship to study at the Parsons School of Design and moved to New York to graduate. This paved the way for her to study drape at the Fashion Institute of Technology.

Having received a proper education in fashion, she worked as a staff designer, which gave her the opportunity to work in the Urban Zen design team from Donna Karan and Jolibe Atelier.

In 2015, Jeanette launched her own clothing brand Jeanette Limas Official in Philadelphia, where she presented several successful collections at New York Fashion Week.

In an interview with Main Line Today, she talked about her love of fashion design since childhood:

“I grew up in the Dominican Republic and have loved fashion since childhood. When I was a teenager, I used my mother’s curtains to drape the dresses I wore to parties and events. (My mom still doesn’t know what.)”

Limas is married to Yaroslav Lozhko, a doctor by profession. The couple dated for a long time before getting married at a courthouse on June 1, 2021.

Since her official marriage was very confidential, Making a cut the contestant shared the news with the public via social media and captioned it:

“Without telling anyone and without planning, Yaroslav and I got married! There were only two of us. Even though I made my dress the day before, it was one of the happiest days of our lives.”

Viewers can watch the latest episode Making a cut on Amazon Prime Video.