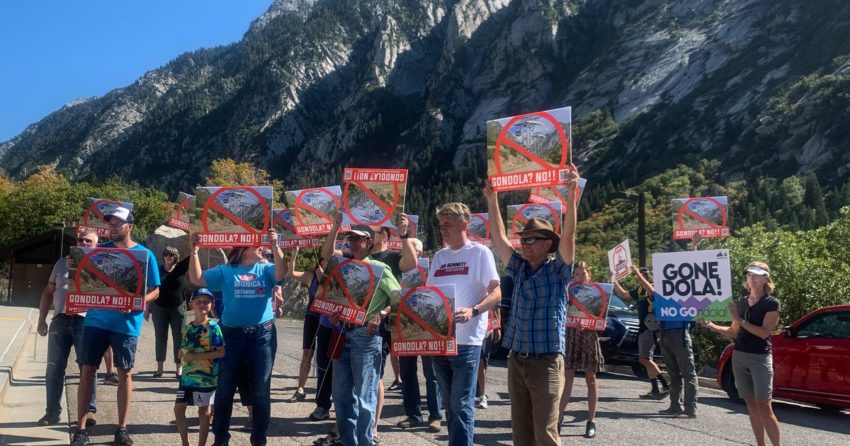 The group, founded by Snowbird and funded by other local companies and ski resorts, is using the funds to propel a government-funded gondola through Little Cottonwood Canyon. On the other hand, a non-profit organization hires lobbyists to fight the plan.

Snowbird, which would benefit from a taxpayer-funded project that would bring customers right to their doorstep, founded Gondola Works to advocate for a gondola that would stretch the entire length of the canyon. Detailed renderings, brilliant commercials and policy advisors have brought the Gondola Works to public attention while Snowbird owns the land on which the potential gondola would be based.

Then there’s Friends of Little Cottonwood Canyon, which started as a non-profit organization in 2021 and has raised tens of thousands from donors and also had a political action committee (PAC) that handed out money to their preferred candidates.

The group isn’t just opposing gondolas, as Friends of Little Cottonwood Canyon president Michael Marker says they’re not interested in another option for the canyon – widening the driveway on each side to make bus lanes.

According to an advertisement distributed by Gondola Works, Utah residents have two options for dealing with traffic problems in Little Cottonwood Canyon – a quiet, clean gondola with a pristine view of the canyon, or an empty bus with trash-littered seats and chewing gum stuck to them. its walls.

“The experience of getting to the biggest snow on earth should be great too,” the commercial actor says before he stops at the entrance to the bus.

The two-minute commercial is one of the well-produced commercials distributed by Gondola Works that portrays the buses as dirty and underused. Commercials, online advertising campaigns, and public policy advisors are what Gondola Works spends its money on. The group declined to provide financial information about Gondola Works.

Dave Fields, president and general manager of Snowbird, told The Salt Lake Tribune that the organization got together in the summer of 2020 when the Utah Department of Transportation narrowed down the scope of its Environmental Impact Statement (EIS).

“It really started with us here at Snowbird,” Field said. “We are most familiar with gondola technology, having a tram here.”

Fields said other groups that joined included Alta Ski Area, which will be another stop on the taxpayer-funded gondola, and CW Management Corp, co-founded by Chris McCandless, a developer and former Sandy city councilman who is backing the project. Another co-founder of CW Management is Wayne Niederhauser, former president of the Utah Senate, who is now the state’s homeless coordinator.

CW Management owns an 8-acre property just south of the proposed gondola base station, although McCandless has denied any intention of turning the area into a commercial or mixed-use property.

Mike Maughan, general manager and president of Alta Ski Resort, said he, Fields and McCandless have been working for years on how best to address the canyon’s traffic problems.

Maura Carabello, a registered lobbyist and president of Exoro Group, a public policy firm, said her agency was hired by Snowbird to work on the Gondola Works project.

Tom Love, president and founder of Love Communications, told The Tribune that his company is advertising Gondola Works on television, radio, billboards, social media and direct mail. However, Love said that his firm did not film or produce commercials for the band.

When asked about Gondola Works’ financial dealings, Fields declined to give details, but said they do not accept donations. Carabello and Love also declined to provide financial details to The Tribune.

The Friends of Little Cottonwood Canyon spend their money primarily on lobbying and publicity campaigns, while collecting donations as a non-profit organization. The group is well aware that the UDOT can only make a recommendation on what to do about the canyon, while state legislators have the final say.

“We knew from day one that this was going to be taken to the Legislature, and so we are trying to explain to lawmakers involved in the decision-making process why this is not a good idea,” Marker told The Tribune.

Marker said his group started out among the people in his area before it quickly grew. The group has four board members and a group of volunteers who meet on a regular basis, Marker said. He added that no Friends of LCC are paid other than lobbyists hired by the organization, and said the group spends money on social media campaigns.

Marker told The Tribune that Friends of the LCC also had a political action committee (PAC) starting in September 2021 when the group was founded, before disbanding in May, as the group is no longer making political donations this year.

Campaign finance records show they paid over $30,000 to Morgan May Public Affairs, a political consulting firm in Sandy. Friends of Little Cottonwood Canyon is listed online as a client of Taylor Morgan and David May, who founded Morgan May. In 2022, the group paid Avalaunch Media, a Lehi-based marketing company, $5,000.

Marker said the group opposed the gondola financially, saying construction would cost the state more than half a billion dollars.

Those who frequent Little Cottonwood Canyon have likely seen banners and court signs across from the gondola at the entrance to the canyon. Marker says they come from a group and their social media campaigns are run by volunteers.

“One of our members teaches social media campaigns and we are also advised by our public relations consultants,” Marker said in a text message. “The other two members have previous experience in creating and developing non-profit organizations.”

As of Friday, it is still unknown if campaigns and lobbying efforts will impact the UDOT recommendation. The department’s final EIS, which will choose either expanded bus service or gondola construction, is still due this summer. Any route would cost the state more than $500 million.