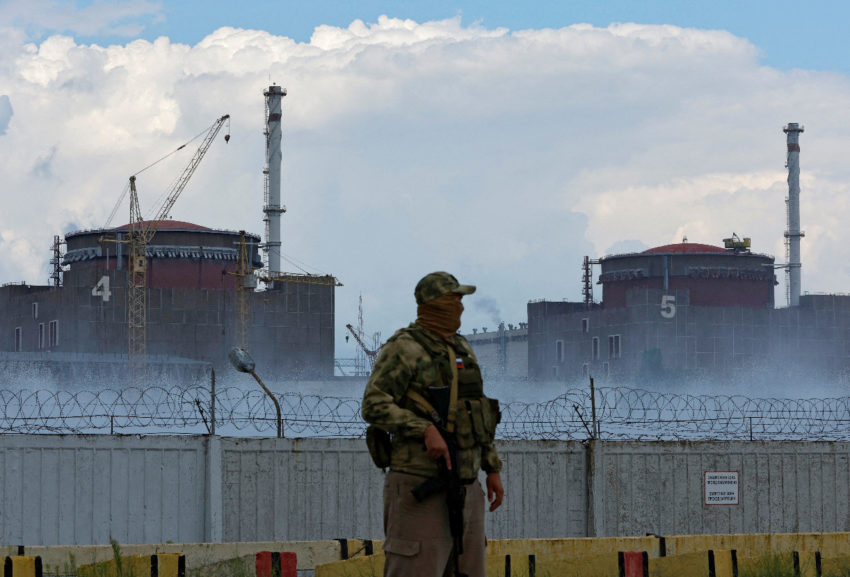 Russian authorities again accused Ukrainian troops of shelling the Zaporozhye nuclear power plant (NPP) just a day before the arrival of the mission of the International Atomic Energy Agency (IAEA).

“Today, at 06:50, the Ukrainian army shelled the territory of the Zaporozhye nuclear power plant and the coastal strip of the city. Large-caliber artillery was used. Following this, two explosions were recorded near the spent fuel storage building,” the report says. This is stated in the message of the military-civilian administration of Energodar.

The Kremlin has said that Ukraine is trying to sabotage the ongoing IAEA mission to the Zaporizhia nuclear power plant. “Attempts by the Ukrainian side to stir up the international mission of the IAEA, increased strikes on this facility and the use of increasingly heavy weapons nullify all the statements of the regime. [of Ukrainian president Vladimir Zelensky] that Kyiv is allegedly interested in a successful visit [IAEA head] Rafael Grossi,” Russian Foreign Ministry spokeswoman Maria Zakharova said at a briefing on Wednesday.

Moscow and Kyiv have exchanged accusations over reports of attacks on the Zaporozhye nuclear power plant in recent months. Russian officials blamed Ukraine for the attacks, adding that they had no reason to strike targets under their control. Ukraine says the attacks are a false flag operation by Russia aimed at portraying the Ukrainian armed forces in a negative light. Neither party’s version of events has received independent confirmation.

Ukrainian Foreign Minister Dmytro Kuleba said that Kyiv expects from the IAEA “a clear statement of facts [Russia’s] violation of nuclear safety protocols”, adding that “Russia puts not only Ukraine, but also [the] the whole world is in danger of a nuclear accident.”

On Wednesday, a 15-year-old IAEA team arrived in the Ukrainian-controlled regional capital of Zaporozhye. From there they will go to the Zaporozhye nuclear power plant. “The mission will take several days. If we can establish a permanent presence or a permanent presence, then it will be extended. But this first stage will take several days,” said IAEA chief Rafael Grossi. “We have a very important task there – to assess the real situation there, to help stabilize the situation as much as possible,” Grossi added.

“My mission is a technical mission,” Grossi told reporters. “This is a mission aimed at preventing a nuclear accident.”

In March, Russian troops captured the city of Energodar in southern Ukraine, where the Zaporizhzhya plant is located. The plant is operated at reduced capacity by Ukrainian personnel under the supervision of Russian troops. Lawmakers and experts have warned that continued attacks near nuclear power plants could spark a nuclear holocaust.

The Kyiv authorities called on Russian troops to withdraw from the area and return the Zaporozhye plant to Ukrainian control. “Every minute that Russian troops stay at nuclear power plants is the risk of a global radiation catastrophe,” said President of Ukraine Volodymyr Zelensky.

Mark Episkopos is a national security reporter for the National Interest.